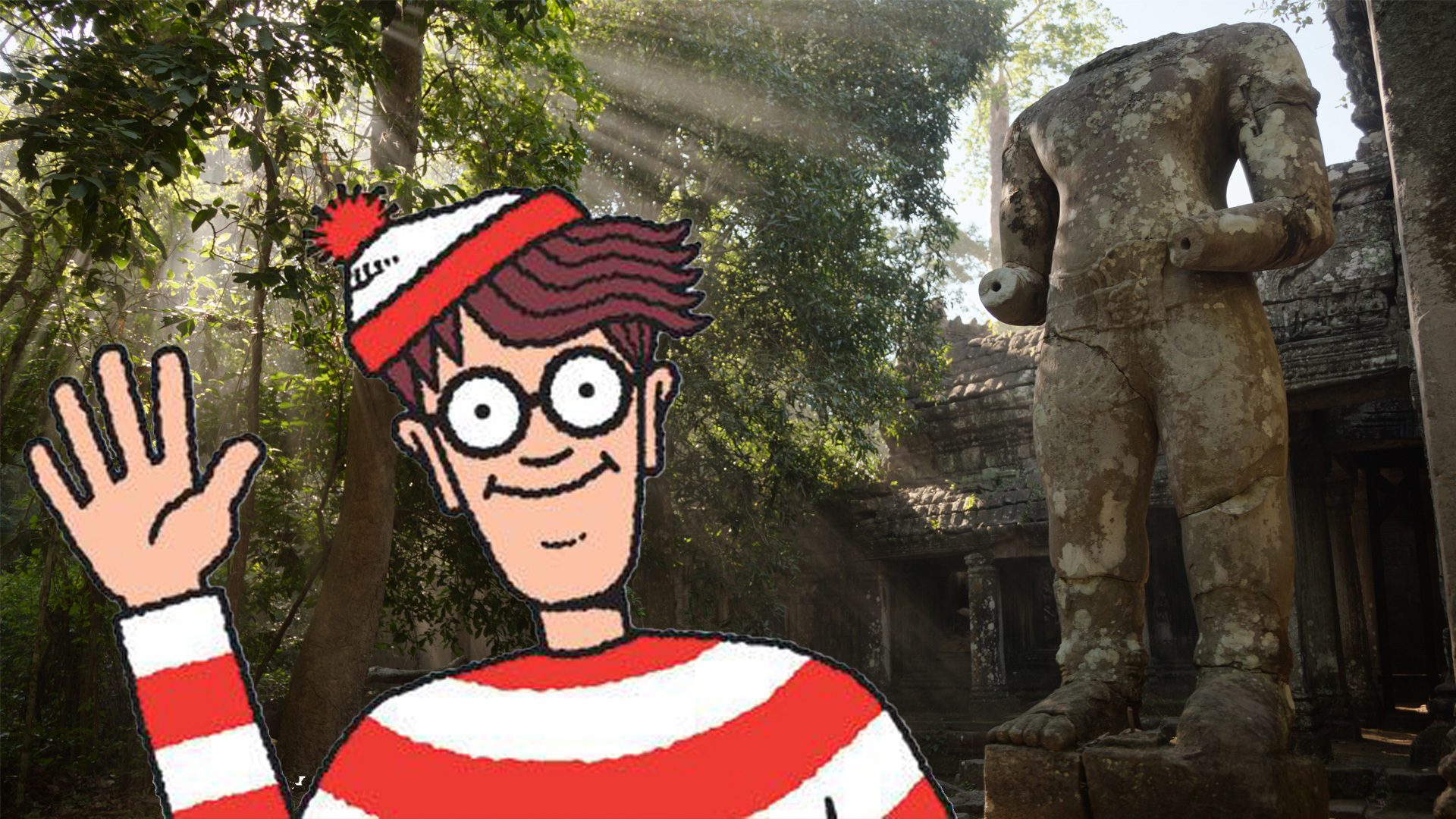 What lurks beneath a Where’s Waldo Puzzle? Robert Langdon is master at stripping away what’s black and white to reveal the white and red. Langdon is a professor of Symbology at Harvard and celebrated apocalypse-stopper. I recently sat down with Professor Langdon in his office at Harvard University to pick his mind about Where’s Waldo puzzles.

Puzzle One: The Introduction of Waldo in the Cavern

Chris: Sorry we’re sitting so close together. I hate staring at these Where’s Waldo books upside down. Langdon: That's ok. All in the name of collaboration! I remember when I saved the world by collaborating with the direct descendant of Jesus Christ … actually collaborated is a strong word. Compared to my brilliant mind, she was more of a sidekick. C: Cool. On this page we’re to find Waldo somewhere in this cavern. L: Speaking of caverns I remember when I was at the Vatican last. He froze as his eyes caught something in the puzzle book. L: The Scepter of S’Kah! A lost relic of the Potatonas Coastal Islands. Legend foretold it grants the power of complete omniscience. Some may say, the power of Go…. C: Found him! L: What? C: I found Waldo. He was hanging upside down with all the bats. L: Oh… you know I saved the pope from assassination by reciting The Latin Mass phonetically, in reverse, while in a pit of snakes. C: That’s nice. I found Waldo before you though. So, I guess we’re one and one. L: So.... this scepter requires a specialist in the ancient Potatanese society, Doctor Sergei Izmennik.

Doctor Izmennik is a Russian political refuge following the U.S.S.R.’s collapse. Now at 85, he exudes the spirit of a man half his age. Langdon, Izmennick, and I boarded a jet destined for the Potatonas Coastal Islands. While sitting around a double seated airline table we played another Where’s Waldo puzzle. C: So, we have to find Waldo in this jungle. And we don’t all have to sit on the same side of this table. Izmennik: No! I hate looking at these Waldo books upside down! L: Doctor. I found S’Kah! I: Pish posh. The scepter disappeared over a millennia ago by invading Spinachenese Warriors of Angalor. L: No Izmennik! What if I had a map that said it never left Potatonas? Langdon pulls a scrap of paper out of his jacket pocket, unfolds it and shows it to Izmennick. With a glance, Izmennick’s skepticism shifts to conviction. C: Did you rip that out of my Waldo book!? Rude! I: Professor, I thank you for finding this… and making me a rich man. L: What? Sergei put that down. C: Oh shit… I found Waldo again! He was behind the banana tree over here. Oh... I glance up to see Izmennik pointing a Walther PPK at Langdon.

L: Izmenick. Do you have any idea what would happen if the Scepter of S’Kah falls into the wrong hands. Izmenick cocks his gun. A consternated Langdon hands Izmennik the map. Without pause, the plane tilts downward with force and immediately loses cabin pressure. From the front of the plane the pilot cabin door swings open and out come red-and-white-robed chimpanzee ninjas. L: The Watchers of the 69th Order! Guardians of the Potantanese… and all their secrets. The ninjas unsheath their banana-shaped-katanas and lunge toward Izmennick, slicing him. While Izmennick’s two halves slither to the floor, the ninjas pick up the map, open the emergency exit door and jump out of the jet. L: Too bad they have the wrong piece... of the puzzle. Langdon reveals he’s holding the real map. C: Did you rip TWO puzzles out of my book!?

The plane crashes, we wash up on the shore of the Coastal Potatonas Islands. The map takes us through caverns that lead to a stone sealed door. L: The spiraling stones on this door form a pattern. If we point them due Northwest the door will open. I remember when I had to stop a planet-wide plague… C: Maybe it’s this button over here with Waldo’s face on it. I push the button and the stone door raises. Through the door is a dark room with a distant glowing light. As we walk closer, the light forms around a red-and-white-striped hooded figure. Figure: You found me. Now leave this place. The light explodes, blinding us. I awoke sometime later in my office in Philadelphia. With no recollection of how I got there. This was one Where’s Waldo Puzzle that left me… puzzled.