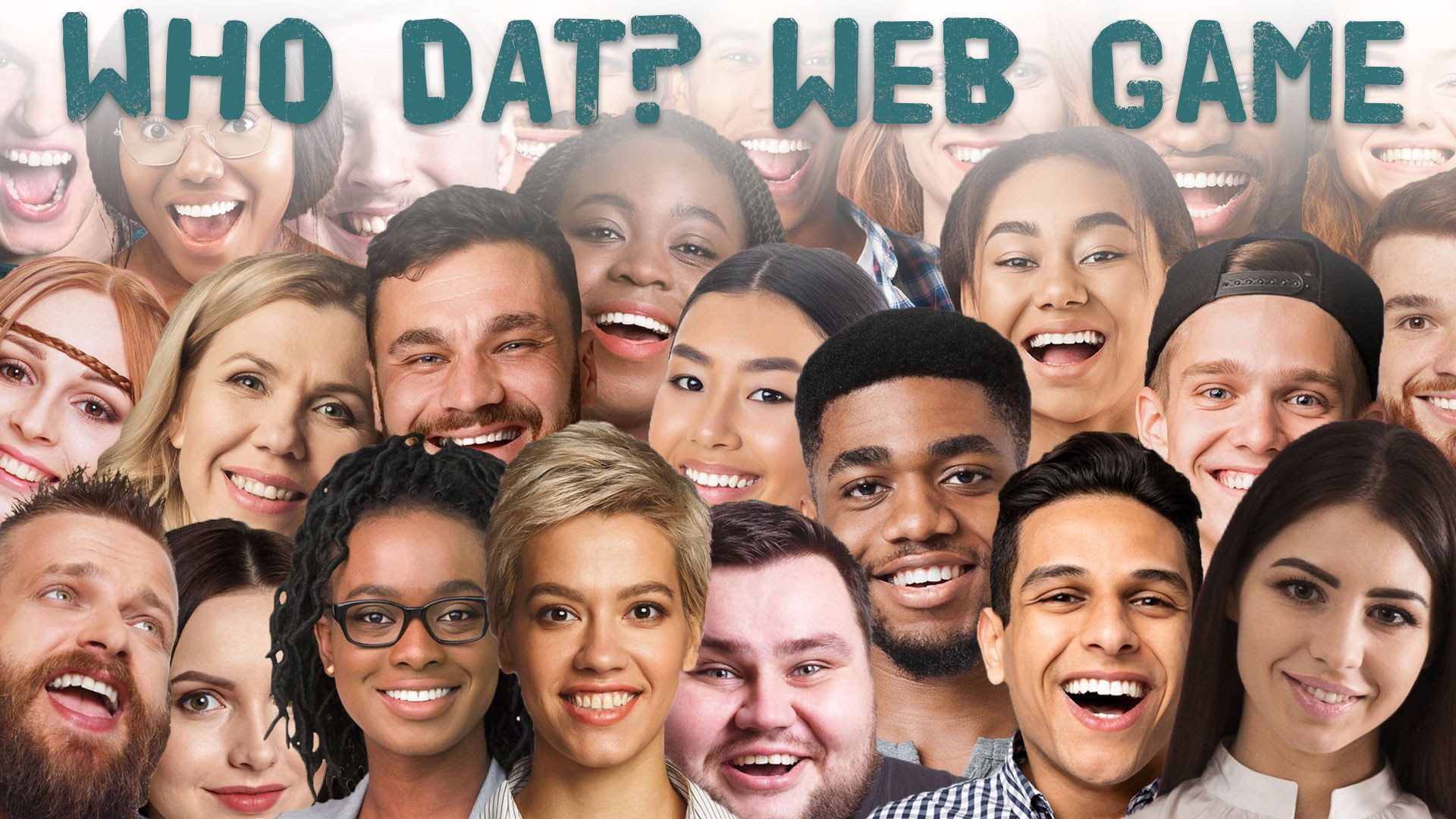 Who Dat? is a party game where players are trying to guess mystery characters. Can you figure out the opposing player's character without asking questions pertaining to physical appearance?

Each user will need to have javascript enabled and this page open on their device. All players will also need a way to communicate: messaging app, voice/video call, or be in the same physical space (we know the last option is unlikely, but theoretically possible).

For larger groups, please refer to the alternative rules.

Objective: Guess the opposing player's character before they guess your character.

Note: Although unlikely, it's possible for each player to have the same character.

Steps During a Player's Turn:

Find like-minded people to play through Discord or watch games live on Twitch.

If you have a group larger than 2 people, you can still enjoy this game. Here's how to adjust:

Origin of The Who Dat? Game

On the Full Belly Laughs Podcast, we play party games. One of the game segments included the classic Guess Who? board game. We couldn't play by the rules of the game on the show, because the segment would be boring and devoid of comedic value; therefore, we invented our own alternative rules, which spawned our own game. Who Dat? is the game we invented for the podcast.

Who Dat? Versus Guess Who?

There are some similarities between these games, but the different rules create a strikingly different experience.

How the Games Are Similar

Both games provide players with a board of characters, and their own character that the other player tries to guess. This is the extent of the similarities.

How the Games Are Different

There are many ways in which the games differ: aesthetics, gameplay, and intended players.

In Guess Who?, the game uses illustrations for the characters. This adds a bit of a youthful cartoonish feel to the game. Who Dat? uses pictures, because the game wants to focus on reality and caters to an older audience.

The game play between Who Dat? and Guess Who? might appear similar, but there are very serious differences.

No Questions About Physical Appearance

In Guess Who?, players are forced to ask yes-and-no questions. In Who Dat?, players can ask open-ended questions. For example, a player can ask "How many kids does your character have?" instead of settling on "Is your person a parent?"

Turn Includes a Question And a Guess

Finally, there are two steps to a turn in Who Dat?: asking a question and making a guess. This rule helps ensure the game eventually reaches a conclusion (because the questions and answers may not be helpful). Who Dat? is also more forgiving than Guess Who?, because wrong guesses at the character are acceptable; in Guess Who?, if you use your turn to guess the character, a wrong answer results in an immediate loss for the guessing player.

Guess Who? skews younger, which is obvious given its aesthetics and gameplay. Who Dat? is intended to be a party game for adults. A fun way to pass the time while sharing a meal or kicking back a few beers or cocktails. The rules surrounding questions also encourage an older audience to ask more serious or intimate questions. For example a player could ask "Is your person a Republican?" or "How many partners has your person had sex with?" These types of questions really change the experience between the games.

Party Game vs Heads Up Play

Guess Who? comes with two game boards, and realistically only allows for two players. Who Dat? can easily accommodate 3-4 players with the alternative rules, but honestly the sky is the limit. The foundation for Who Dat? makes it a great game for a parties of varying sizes.

Let me know about this fun web game on social. It's a great way to find someone that can play with you.