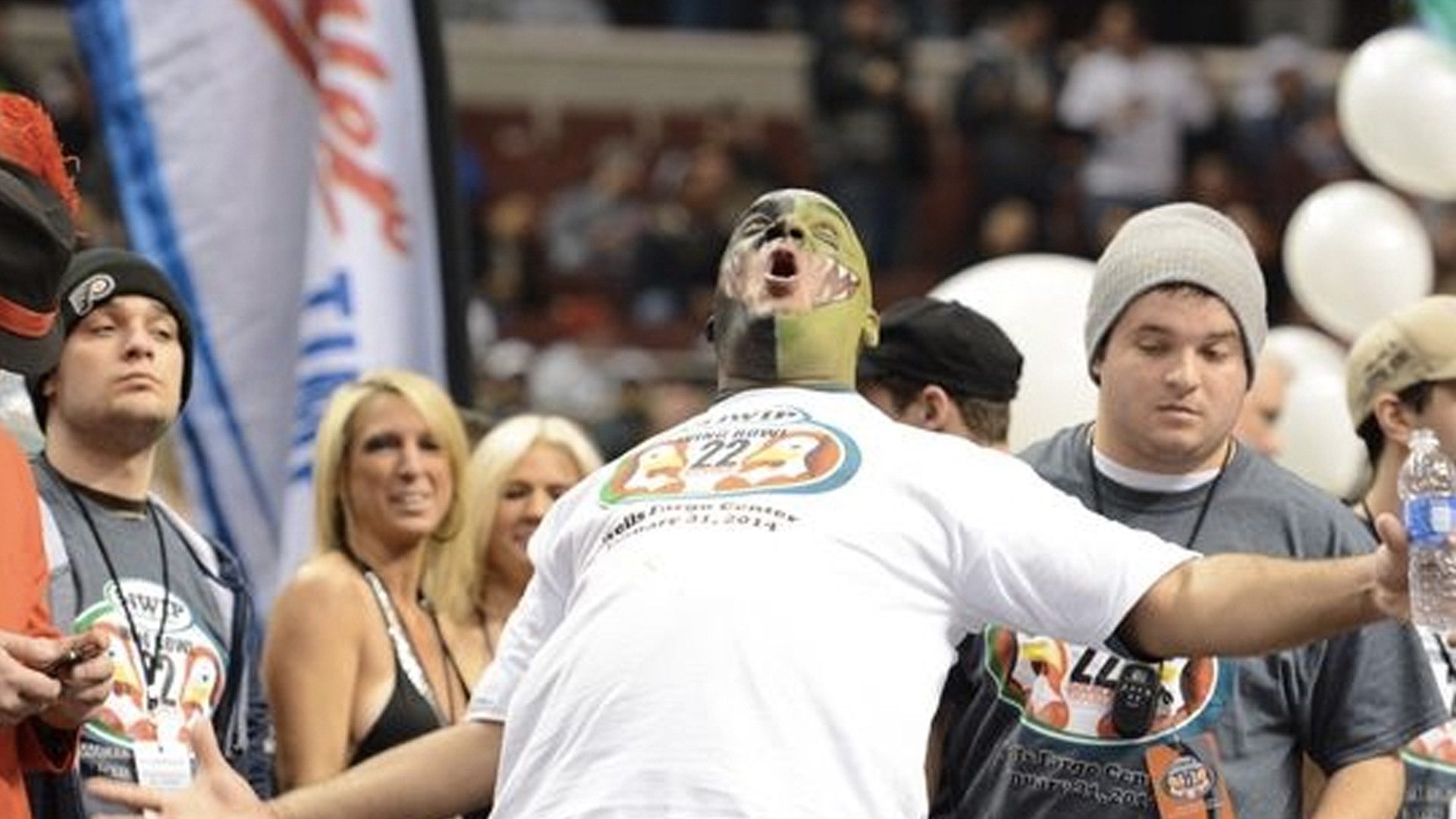 Wing Bowl XXII: You will never find a more wretched hive of scum and villainy. Out of respect for you, the reader, I will attempt to recall the decadence and depravity of the Wing Bowl.

This is to save you from ever having to experience the nonsense first-hand. And fret not, intrepid reader, for I am one of you. I attended for strictly journalistic purposes, more as detached witness than active participant. Or so I kept reminding myself as the event unravelled around me.

Before the sun rose that morning, I was in a parking lot. Shitfaced Philadelphians got too rowdy around me for this or any other hour. It was like an Irish wake, celebrating the death of any dignity that crossed into Wells Fargo Center. At the first hints of dawn, the crowd began to abandon their parking-lot beers. They were in search of overpriced indoor beer. Everybody at the Wing Bowl had to piss urgently, the whole time. It was as I elbowed my way to a urinal that I remembered why I’d come. Why we all came: to witness competitive eating at Gladiatorial levels. Was I part of the urgently-pissing masses? Would I lose all self-awareness at the first sight of behemoth wing-eaters? Heavy thoughts while waiting on a urinal. But first, more beer.

When I took my seat, I was able to confirm a long-rumored element of the Wing Bowl. One that had become legend to most young suburban boys. If you go to a Wing Bowl, you get to see boobs… Kind of. For whatever reason, women in attendance were bearing their breasts on the jumbotron. But whenever they did, the camera operator cut away. This raised plenty of questions that I was too drunk to answer at the time.

The competitors made their way to their stages. They entered adorned in lavish capes and accompanied by larger-than-life entourages. Clearly, somebody somewhere wanted me to think that this was a big deal. Do you enjoy meaty men making grand entrances escorted by strippers? Well then buddy, have I got some good news for you. Plump men called “The Bear” and “Deep Dish” crawl out from presumably their local Hooters. The competitor with the best entrance wins an award just for that. I do not care to remember which one it was.

The city’s hungry hadn’t even yet woken to the pangs that start their every day. Meanwhile jolly men were gorging themselves until they vomited. Yes, they actually vomit.
Now, I know what you’re thinking, reader. “Where does this asshole get off!? You reference the city’s homeless problem while still participating in this event?”
Well you're right, reader. I shouldn't have been there. I did it for research? Ah who am I fibbing. At this point you either hate me or you want to punch me.

At one point some sort of rapturous event consuming an entire seating section of the stadium. What looked to be a human tidal wave actually turned out to be a brawl so large that Phillymag.com picked it up. Still to this day, there are videos circulating of my cousin Kevin. Him and his boys from Rhawnhurst fuckin’ tossin’ Fox Chase dickheads, as he would put it. The Rhawnhurst boys too were fuckin’ tossed, in turn. Still no word on where Mayfair and Oxford Circle were during the scuffle.

During all this, I again forgot that there was a competitive eating event amidst the chaos. Like the eye of a storm, the stage remained a constant center of relative-calm. Just consistently-fast-wing after consistently-fast-wing. And oh look, some middle-aged lady is showing her boobs on the jumbotron again. Wait never mind, the cameraman cut away and you can’t see it anymore. Fret not, there’s a man covered in wing sauce wearing a purple crown. And the answers to life's infinite questions can be found in his glazed-over eyes.