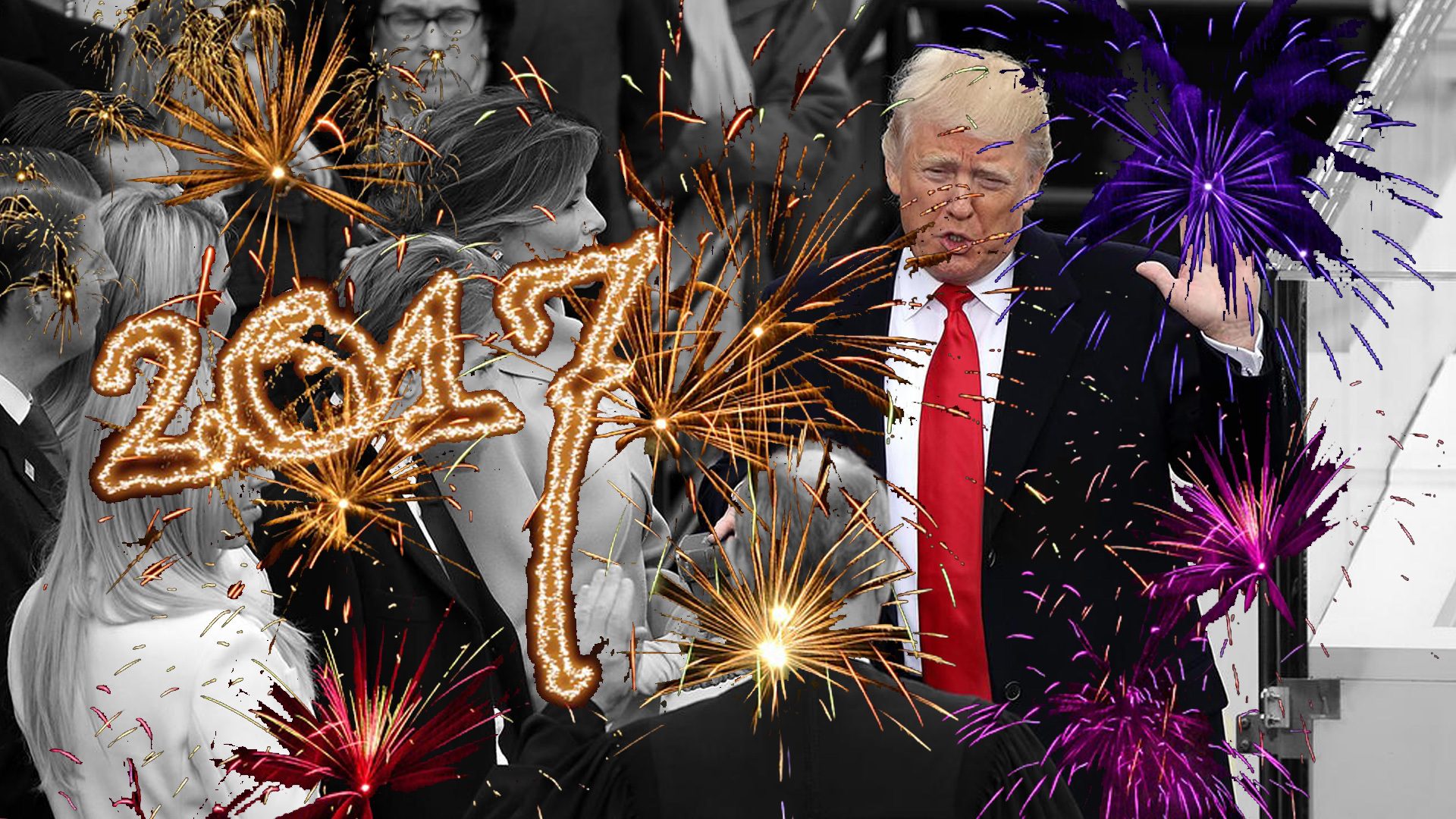 This 2017 Year in Review is the most comprehensive year in review article so far. And it wasn't easy to assemble. 2017 has been anything but typical. We thought 2016 was bad; calling that a "bad year" is akin to viewing the Pacific Ocean as "somewhat damp." The 12 calendar months that comprised the past year depleted us of everything. From Gene Wilder to David Bowie to even Vine. In U.S. politics the voting public, which has the combined IQ of a calendar, elected an Oompa-Loompa. Outside of the country, things aren't much better: Unfortunately 2017 wasn't much better.

The year kicked off, as it tends to do, with the annual installment of Dick Clark's Rockin' New Year's Eve. It was hosted by, as its title suggests, Ryan Seacrest. Singer Mariah Carey bridged the gap between the two years. During the performance her voice and music appeared in 2016 but her lips didn't move until 2017. That's why I had to count this in my 2017 Year in Review.

The government now contains more Republicans than a Hall & Oates concert. They gutted the House Ethics Committee. We wouldn't want something that exposes our leaders of Saddam Hussein ethical practices. The new government order has yet to make good on the following: But no 2017 Year in Review article is complete without President Donald Trump. Despite his popularity with both old rich white men and older rich white men, Trump is still despised. His approval rating even went down this year with neighboring galaxies. His tiny hands have been hard at work issuing executive orders like they were whiny tweets. Critics continue to compare Trump to Hitler. But this is an unfair comparison, as Hitler was a somewhat gifted artist. As you may recall, Trump actually suspended all funding for national arts-related programs.

Outside of politics, things are looking even bleaker. The U.S. had its first mass shooting of the year when a gunman opened fire at Ft. Lauderdale Airport, killing 5 people and wounding several others. Then there was the tape of a hate crime in Chicago. The footage did allow Facebook users to identify their most racist friends. This combined with the 2016 election defriending, echo chambers are stronger than ever. And remember the despair that struck in suburban New York? It was when a Long Island Railroad train actually arrived in Long Island.

This year we lost the writer of the Exorcist and the wrestler Jimmy "Superfly" Snuka. And people thought it couldn't be worse than 2016.

La La Land scored big at the Golden Globes. Meryl Streep stole the show with her speech bashing Donald Trump. In response Trump stated that Streep never starred in a movie and that he was actually the lead in Mamma Mia. Finally, after 146 years, Ringling Bros. Circus closed its tent flaps. It could in no way compete with the 24-hour clown-and-elephant show. That show is also known as the current United States government.

In tech news, the iPhone celebrated its 10th successful year of annoyance. The users celebrate years of software updates that turn their devices into paperweights. Samsung revealed its Galaxy S8. The company promises will come loaded with "fewer explosions."

Our 2017 Year in Review shows that the year was pretty bad. But remember when Rooster Soup Company opened? It's a luncheonette/diner at 1526 Sansom St. in Center City Philadelphia. It's from the Federal Donuts crew. They sent their profits to charity, so there's one good thing.