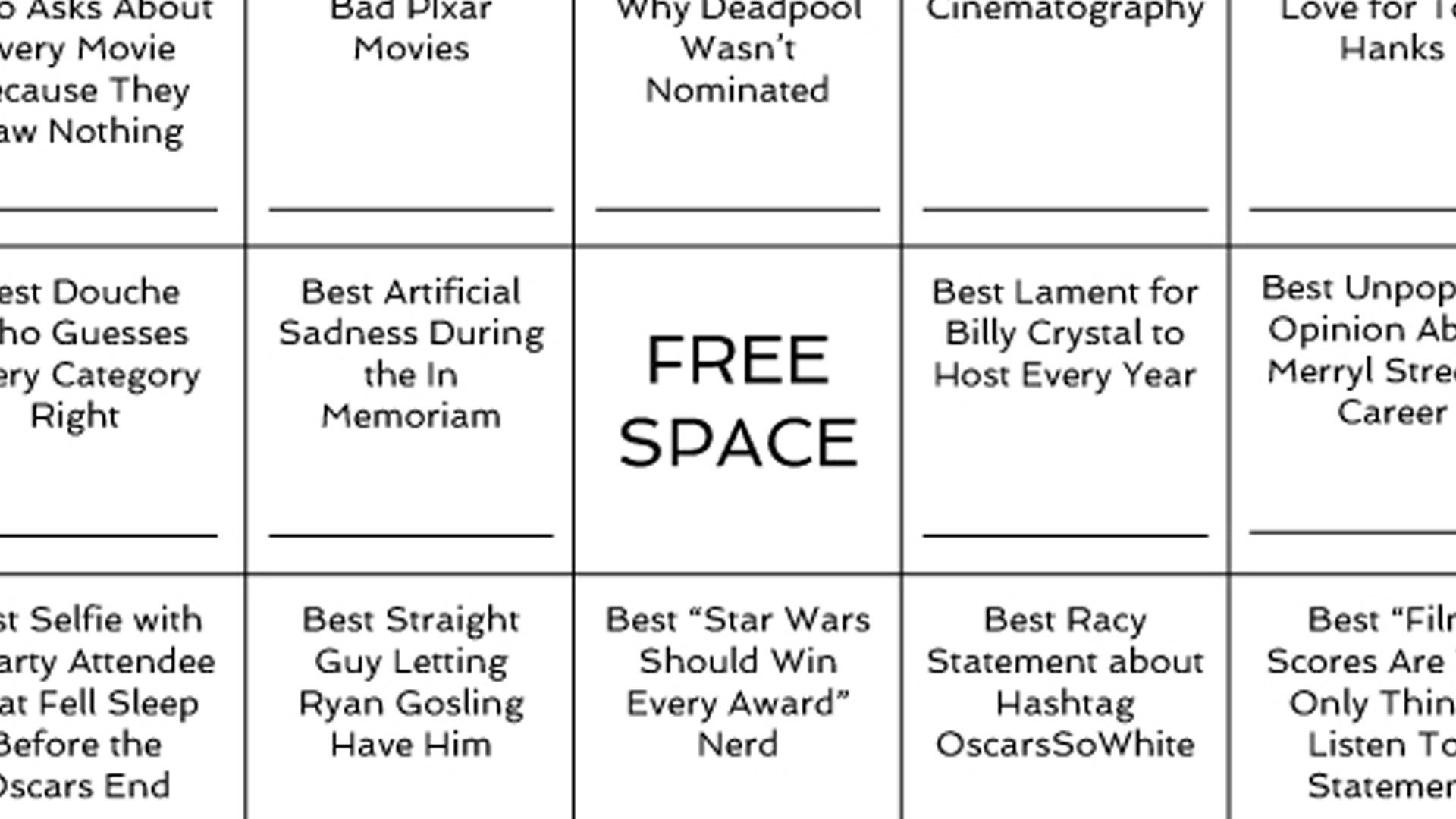 The Oscars are coming up, which means that everyone is preparing for an Oscar party. An event that's not quite a party, and not quite a forced office holiday party. Still, you want to find out what movies you should have saw instead of that 'XXX' sequel nobody wanted. Now, you could just sit and watch the Oscars for 4 hours, but that would be insane. There has to be some super-fun activity for everyone to engage in. Enter: The Oscar Pool. Sure, you end up guessing on 75% of the categories, because let’s be honest, you only saw La La Land. There are plenty of common events and discussions at parties that happen. Kind of how every movie looks the same once you’ve opened up the Pandora’s Box that is Joseph Campbell’s “The Hero’s Journey.” We thought we’d give you a more realistic Oscar Pool this year with a few moments you’re likely to experience. Here are some nominees likely to take home the gold.

Best Douche Who Guesses Every Category Right (even the short films)

Somebody invited the film buff. Wait, they didn’t? He just showed up? Really? This guy's guessed every winner. Acting, editing, sound mixing, you name it. The secret is that he’s not guessing, he’s been scouring through oscar buzz blogs for months. Months. People spend less time buying a house. During the commercials, he drones on about a Fellini film you haven't seen. Apparently that makes you a “philistine.”

Best Straight Guy Letting Ryan Gosling Have Him, If He Wanted

Mr. Gosling is a good-looking man, ask any woman within shouting distance. Seriously, try it. You could just start thinking his name and women will gravitate towards you. Every heterosexual male has reluctantly questioned their own sexuality, I’m definitely not the only one. It's quite often brought on by the appearance of a suave, ripped hollywood superstar. It was Daniel Craig for me. Straight Guy’s Thoughts: Woah, I didn’t know Ryan Gosling was that ripped. He looks good, like really good. Wait, no he doesn’t, I’m not gay. I’m secure with my sexuality, definitely not gay. Well, like, okay he is really attractive. And who could pass up on a chance to be with Ryan Gosling. Yeah, I guess I’d let him have me if he wanted.

Somebody is guaranteed to bring up the last two year's #OscarsSoWhite protest and how it "wasn't really that big a deal". Somebody will then promptly slap him in the face, and remind him to not bring that shit up again. Please. There’s enough tension in the country right now. Movies are a fun thing.

The neckbeard who only sees Superhero movies starts ranting about how good Deadpool was. We know Deadpool was awesome. Stop reminding us. It was apparently also cool enough to warrant a line of socks, underwear, hats, knives, backpacks, tampons, and wedding cakes. Neckbeard whines and suggests they make a new category for “Action Movies.” Neckbeard doesn’t get out much, so let him think what he wants. Those movies are all he’s got.

You’ve always wondered "What the hell is Cinematography?" Few people know. And those that do also still live with their parents well into their 30s. But eventually, somebody tries to explain what they think it is. That statement is then contradicted by another friend’s idea, which is corrected by your aunt who’s neighbor’s son is going to Film School at Devry. After 45 minutes of bickering, you agree that “pretty, art films about sad cowboys have the best cinematography.”

Now you know the categories, let’s see how many you can fill out. We’ve even left a few blank spots for some categories you think we missed. Follow the link to Full Belly Laughs’ Oscar Pool. Did you enjoy playing our Oscar Pool Bingo? Tell us about it on Twitter by tweeting @fullbellylaughs.