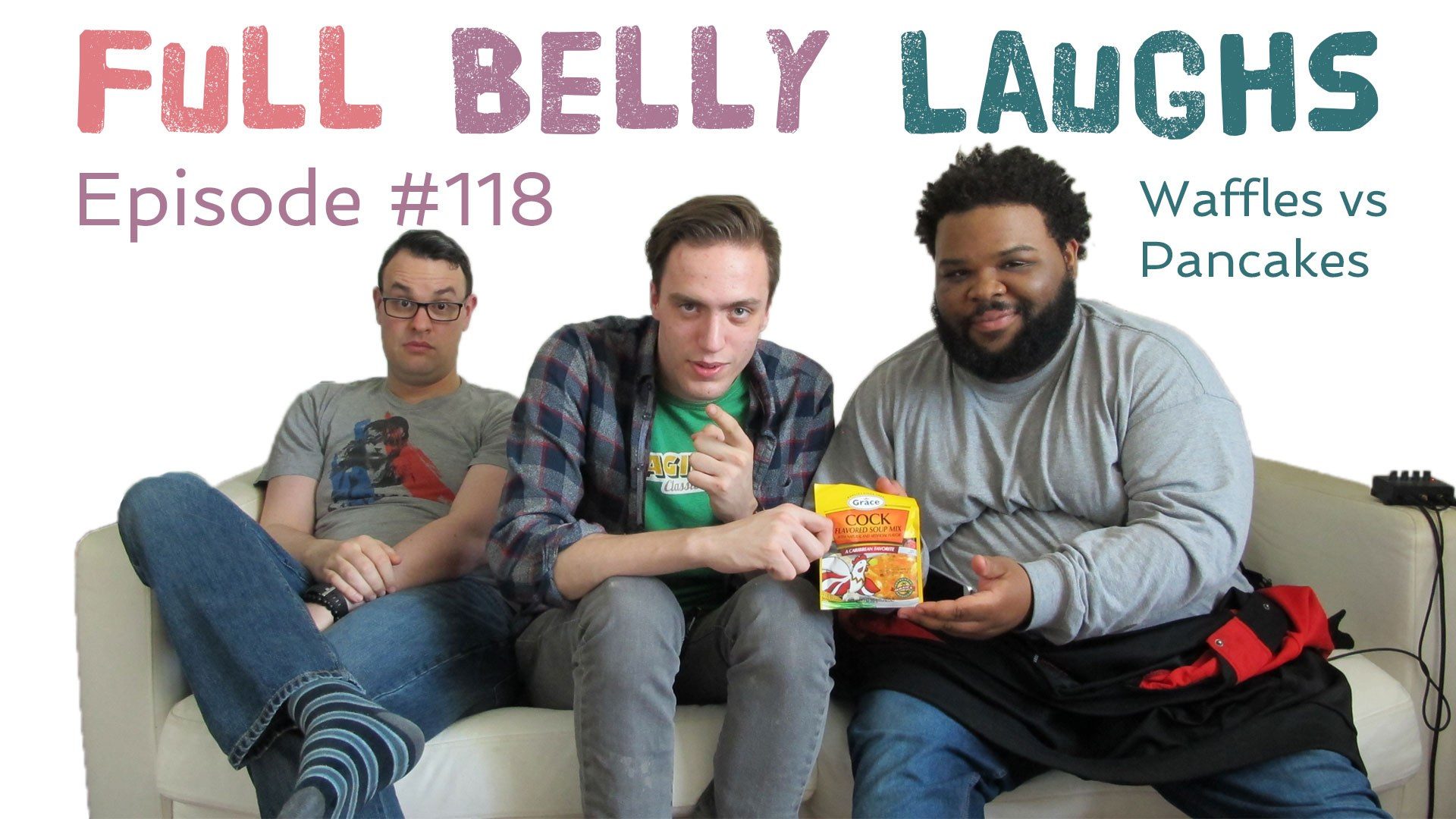 Use the audio player below to enjoy Full Belly Laughs Podcast Episode 118: Waffles vs Pancakes.

Do you prefer waffles or pancakes? Does the time of day or type of meal dictate your preference? Does one get better with certain toppings? All of these questions and more are answered. Use the player above or continue reading to learn how people feel about waffles vs pancakes.

Past guests Ben Farrell and LeMaire Lee stop by the new apartment to lay down an episode of the podcast. The conversation runs wild. We chat about the levels of Super Saiyan, then how to beat a terrible hangover. Ben shared a recipe with us that suggested it might be wiser to just not drink in the first place. The boys drop their opinions on waffles vs pancakes, but they can't contain their excitement. The distractions were too strong to make the conversation dedicated to the topic.

Matt Byrne calls in to the show. He joins the conversation about waffles vs pancakes, and says some hilarious stuff. Later in the program he calls back and he's with a whole cast of characters. The impressions were amazing and a must listen.More importantly this is the first time someone called into the podcast. Congrats Matt on breaking the glass ceiling for guests to call it. The audio worked well, so expect more shenanigans like this in the future.

Fans React to Waffles vs Pancakes

Thank you to all the fans that wrote in with your opinions. This highly contested issue proved to be super fun. Everyone submitted thoughtful and hilarious answers to contribute to the show.

You have to dress up pancakes, you get them stuffed or with chocolate chips or fruit cooked in them or some other gimmick that makes them taste good. Waffles on the other hand are just amazing as they are.

Samantha from New Jersey lays it down with her awesome answer in defense of waffles:

Waffles because texture! I don’t want to eat soggy bread pillows. I want to eat crispy-edged hollows filled with butter and syrup. Or butter and powdered sugar, only don’t accidentally inhale or you’ll die.

Jen from West Philly declared while arguing with Arielle:

I have to say pancakes. The pancake has a lot of range. Flap jacks, corn cakes, thick and fluffy or crepes! Make em sweet with chocolate chips or go savory with mixed in bacon. Or my personal favorite, mixed in strawberries and blueberries! Possibilities are endless. Waffles are easy to screw up and in my opinion, don't have the same range. By the way, over in Mullica Hill in NJ, Blueplate makes these cinnamon strudel pancakes that will make you question your existence and mad at your mom for failing you as a parent.

Last, but certainly not least, we got Jeff Hellkite from the multiverse praising pancakes:

Best of Both Worlds

If I'm eating out: pancakes. Making at home: waffles.

A more thorough answer that defends both choices in a way came from Matt in Audobon, PA:

I'm going to say waffles. Here's why. Pancakes are awesome, but if you're talking traditional american pancakes, you're talking about a breakfast food pretty much exclusively. Waffles are much more versatile, you can use them in dessert, or make sandwiches with them, and they combine better with traditional meats than pancakes do. Also they're less messy when compared heads-up as a breakfast item due to the built-in syrup trap and consistency. That said, given the option exclusively for breakfast, and specifically in that context, nothing beats chocolate chip pancakes.

Some people responded with answers that blew our minds. Like Veronica from East Passyunk Crossing in Philadelphia, because she said:

What!? Didn't even know these were a thing. Life just won't be complete until we taste these jawns.

In our humble opinion they tend to just offer more. Pancakes are at their best when different things make it inside the pancake. Think chocolate chip or blueberry pancakes. But there's nothing stopping a waffle from doing the same. Given the texture and increased surface area of a waffle it feels like a no brainer. Outside of breakfast it's no contest, since waffles far out weigh pancakes in applications.Former guest and pastry chef Jose Ramos says it best:

Do you have an opinion not represented on this podcast or blog post? Drop us a line using the Contact Form. Awesome answers will receive a reply, most likely asking if we can give you a shout out on a future episode.

Comedians and commenters share their thoughts on which sweet treat breakfast is the best. Learn about waffles and pancakes.