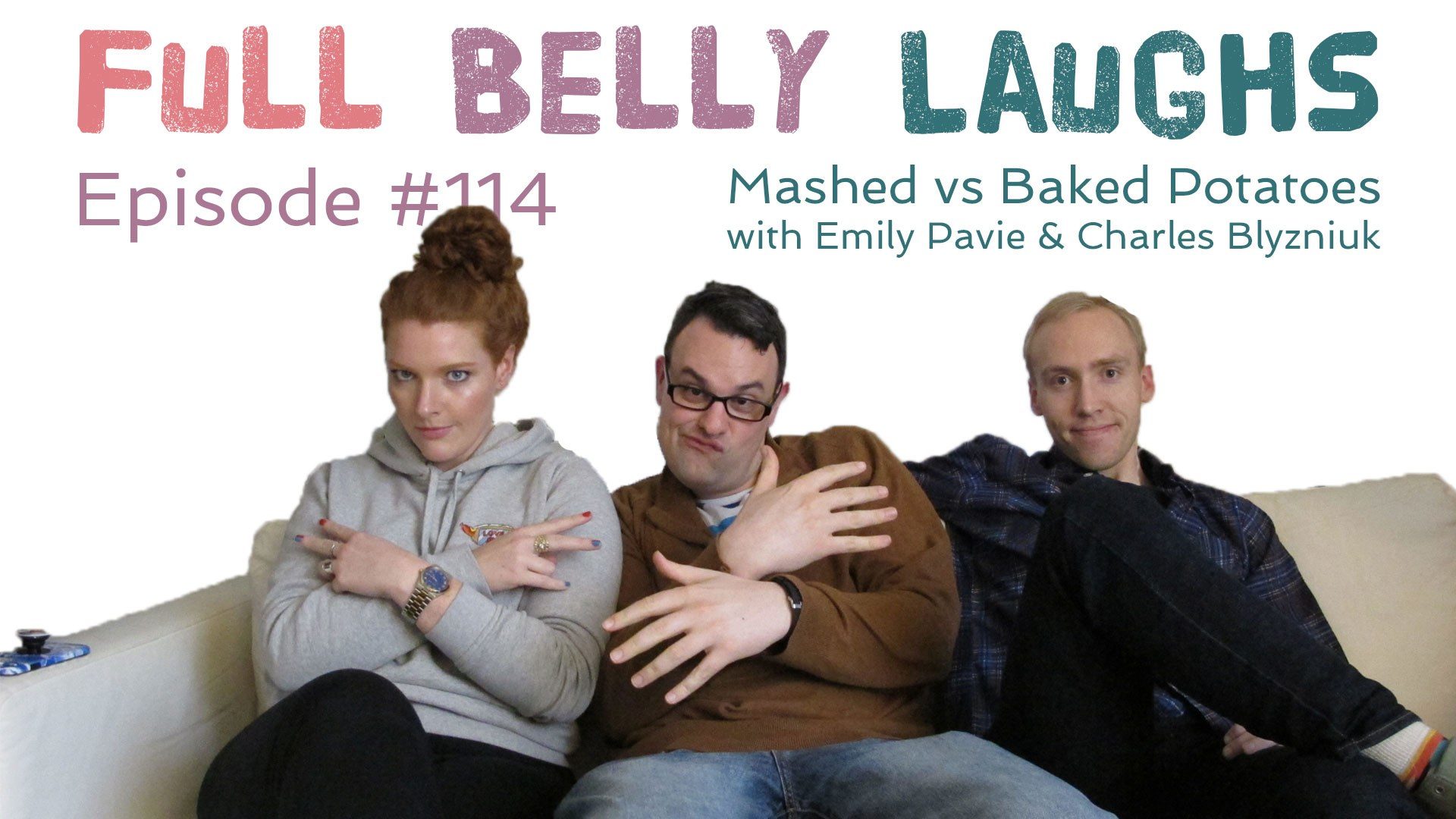 Use the audio player below to enjoy Full Belly Laughs Podcast Episode 114: Mashed vs Baked Potatoes.

In the great debate of mashed vs baked potatoes, which one do you prefer? Do you like the toppings truly mixed in as opposed to just resting on potato halves? Do you like the pureness of the potato in its true form? Find out the pros and cons on each of these potato preparations.

A new crew stopped by Brian's apartment. Although Emily Pavie and Charles Blyzniuk had been on the show before, they never appeared together. And Brian can't wait to have them back. They were super funny. It's always a blast hanging out with them. The chats before the recording were just as quality as the ones that they laid down.

Chuck Failed Us Once Again

A standard game portion of Full Belly Laughs is going through Chuck Klosterman's Hypertheticals: 50 Questions for Insane Conversations. Per usual the hypothetical proposed on the card was a bust. It was not that exciting, kind of lame, and ultimately did not provide an insane conversation. If anything it was insane that we kept talking about the game and the card for more than like ten seconds.

We did redeem ourselves with some rounds of Super Fight. Emily and Charles did their best to argue for their respective characters, but in the end most of the cards dominated the match. Certain conditions and character matchups made it easy to see a clear winner.

The preparation for these dishes is probably similar, but their flavors and texture are wildly different. There were a lot of great points made on the podcast. There is something about a baked potato that is just classic. It feels right when you think of steak, or simpler times in America. But mashed is the legitness. The skins are way better in mashed potatoes, plus add-ons are integrated into the party better. Loaded baked potatoes sometimes feel like they're just potatoes with things in the way. The audience of Full Belly Laughs had a few things to say in the mashed vs baked potatoes debate.

Here's some of our favorite quotes from fans. These were read on the show in favor of mashed potatoes:

Every time I've ever eaten a baked potato is the same--I eat a bunch of toppings, and then try not to look at this depressing lump of flavorless starch. Mashed potatoes, every damn day.- Jeff from Kingsessing in PhiladelphiaOn taste and texture definitely mashed. But at least you know what your getting with a baked potato. I hate it when a “chef” doesn’t tell you the mashed potatoes are actually something else like cauliflower, turnips or anthrax.- Chris from Girard Estates in Philadelphia

We had one exchange in defense of baked potatoes that was just too good not to share in its entirety:

Baked! Love the skin, love putting tons of butter/sour cream/cheese/bacon/etc all over It! Mashed is fine for kids but if you're an adult male, you want a nice big baked potato next to your rare steak!- Alex from Magnolia, NJ

You're not even a real person anymore.- Tom from Bethel, CT in response to Alex from Magnolia's comment

I won't apologize. Also, if you've never basted a potato in olive oil, wrapped it in foil and grilled it over hot coals for 30 minutes, you should, because it's better than turning your potatoes into baby food- Alex from Magnolia, NJ rebuts Tom from Bethel, CT

Tom gets the final word:

Skins in mashed is the best side possible. I hate anything grilled over coals.- Tom from Bethel, CT to Alex from Magnolia, NJ

We had a shout out for smashed potatoes:

The Real Deal on Mashed vs Baked Potatoes

Mashed is safer. It's a type of potato dish that you are never mad at. In all realness, it's probably pretty safe to order and will be decent. It also muddles the line between other styles of potatoes, so it might garner some undeserved love. Smashed is similar. Whipped is close. But neither is truly mashed potatoes. That said mashed potatoes are still very solid.Baked potatoes done right will rock your world. The problem is that finding a great baked potato is like searching for the holy grail. Most of the times someone basic just pops it in the oven without too much thought. A sad baked potato is a depressing affair. However when faced with a lackluster baked potato, you can always convert it into a mashed potato with the help of your utensils and willpower.

Do you have an opinion on mashed vs baked potatoes? Drop us a line and you'll receive a shout out on a future episode. Just use the Contact Form.

The two most popular styles of potatos pitted against each other.

We asked the audience "What's better: mashed or baked potatoes?" Find our their answers and the pros and cons of each potato.