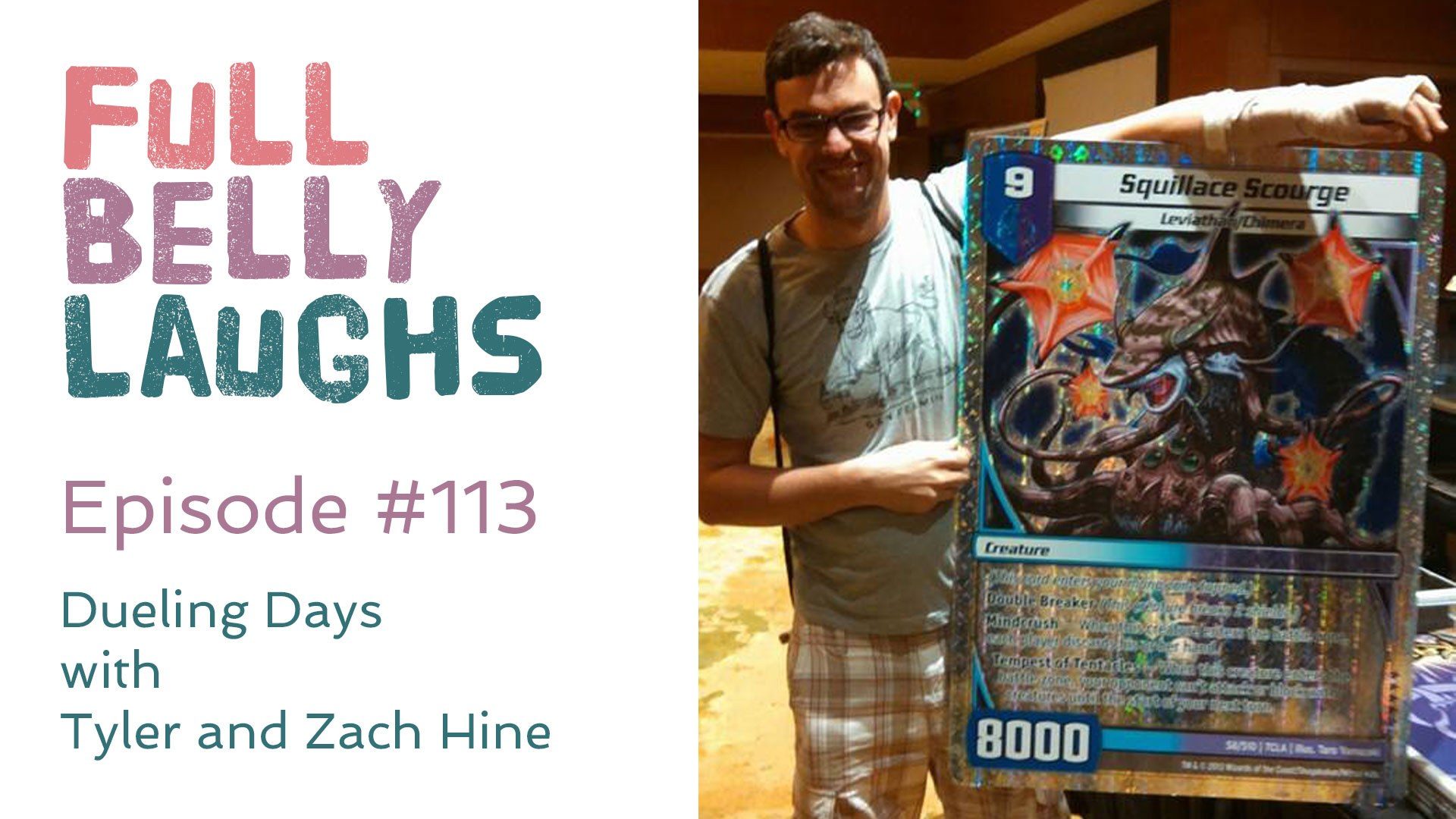 Use the audio player below to enjoy Full Belly Laughs Podcast Episode 113: Life of a Duelist.

Before comedy and podcasting, host Brian Durkin used to be a duelist. That's somebody that plays trading card games, but on a serious level. So think baseball cards, or some type of collectible like stamps, but they are game pieces. Brian used to travel the world competing in events with these game pieces. It's a whole subculture. He brought on two of his favorite buddies from that past life and they talk about the days of being duelists.

Tyler and Zach Hine join Brian down memory road as they recant their past lives as duelists. It was a wild ride. Filled with gamers and their butt cracks. The gang cracks themselves up as they try to make sense of this subculture to the listening public. The life of a duelist is not that easy to understand, but boy oh boy is it a funny world once you know what's up.

There are certain terms that people use when they come from this subculture. Turns of phrase that other people just might not understand that well. The boys shed some life on some cool phrases that you could jack and use in your life.

This is used to describe something that's a bit ghetto but still gets the job done. Like the car John Candy drives in Uncle Buck. Yeah it got him from place A to B, but that thing killed all surrounding life with its exhaust pollution.

Someone that plays trading card games. This turn comes from Yu-Gi-Oh! In that TV show they play the card game you can play in real life. During the adventures of the show they refer to each other as duelists. The community of Yu-Gi-Oh! players started to refer to each other with this term of endearment, and it's spread to other games. A perfect example is Magic: the Gathering. It would be wack to call those people magicians, so duelist will suffice.

In Magic: the Gathering there are five different colors you can use in your strategy. When you add just a little bit of one of the colors, it's said that you are splashing that color. Think when a fancy cocktail has a splash of grapefruit juice. You can use this to describe anything that's got a little bit of something going on in it. Important distinction: splash describes a small amount of something in a thing.

Very similar to splash, this is when you add a bit of something to a thing. Yeah this definitions are not the strongest. Sorry. It's identical to splash, but the usage is different. You would say pop when it's fresh to add that thing to the concoction. A cocktail might have a splash of grapefruit juice, but you add a pop of salt for flavoring. Pop is also used to request a sample of something. For example, "Let me get a pop of your fries" is asking for like two french fries.

(Eat/Swing) The Beats / The Beat Down

In trading card games you have characters or avatars that attack your opponent. It's like a simulated war zone. Most of these nerdy card games of course have a fantasy vibe. Since there are goblins and elves and other nonsense like that, they tend to be carrying clubs and crap. So when your team attacks the opponent, to visualize the situation it looks like your goblins are swinging clubs. This is swinging the beats. The beats are when your guys hit your opponent. The beat down is when you go hard in the paint with this stuff. Eat the beats is taunting your opponent. You're telling that person they must eat the punches on the chin because they can't stop won't stop you. In regular life eat the beats is the most applicable. It's used as a "it sucks to suck" kind of mantra. Let's say your coworker is salty for not having an umbrella and it all of a sudden rained on them. You could respond by telling them to "eat the beats", since their is nothing they can do but air dry.

Used in any setting with a game of chance, this is when someone is asking the gods to grant them something in their favor. The requester shouts, "One time" right before a card is draw or something is revealed. This is typically used in a moment that will decide the fate of the game. The ironic part is that anyone that says this phrase has never said it only once. So even if their wish is granted, they never stop asking for more "one times". In real normal life you can use this phrase when cheering for your favorite sports team. Think about an official reviewing a play. You can shout "One Time" at the TV in hopes that the referee will decide in your favor. You can also hope you get a callback on a job interview, or anything other fate related thing outside of your immediate control.

So Many Insane Words

This is just a short list of the terminology used in the dueling world. We cover even more on the podcast. If your favorite isn't on the list, be sure to drop us a line with the contact form. We'd love to add it to this page.

Tales for yesteryear as card players chat about the grind of playing games.

Three card players hang out and reflect on their lives playing trading card games. Learn about this lifestyle and what they eat now.