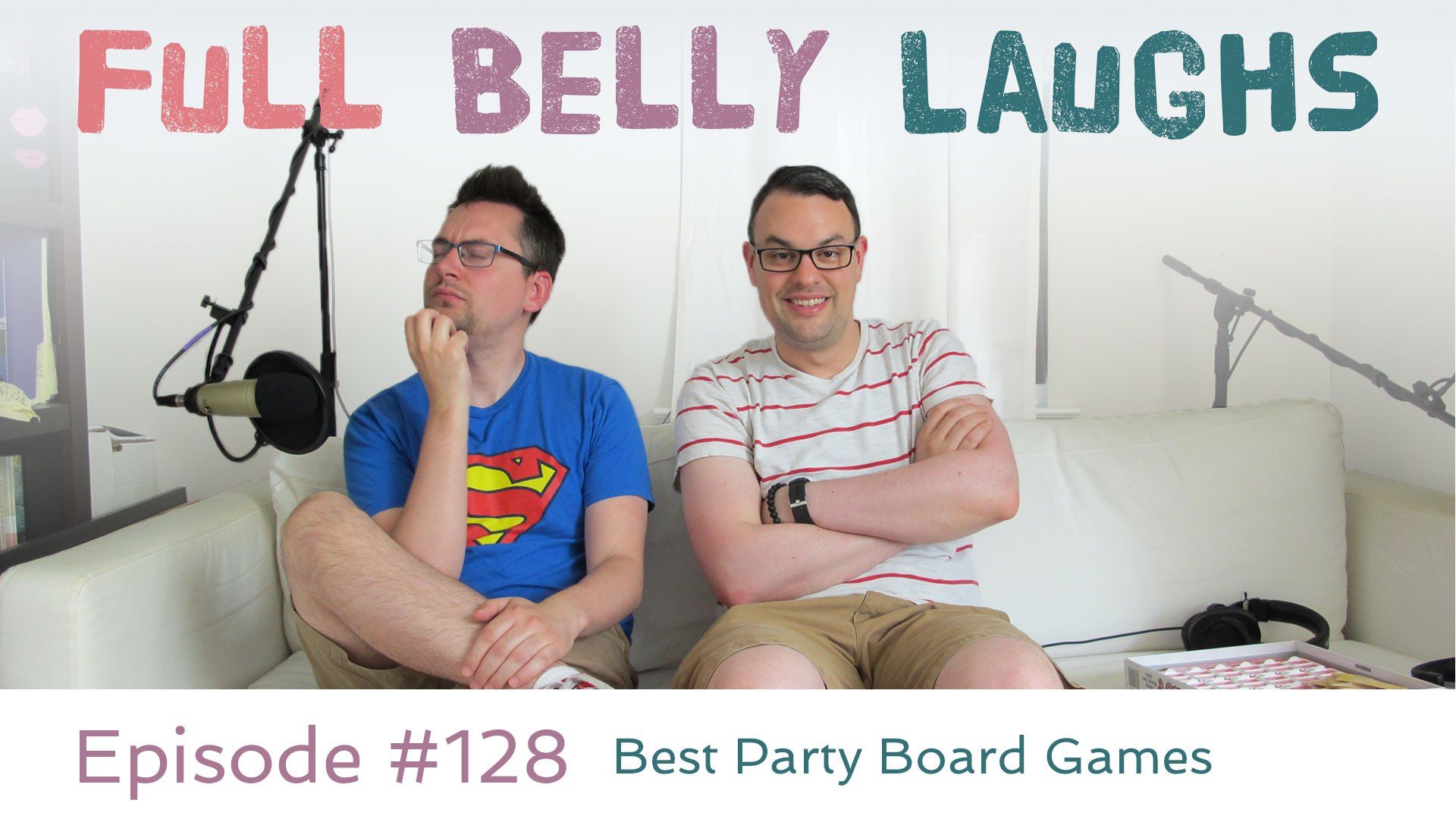 Use the audio player below to enjoy Full Belly Laughs Podcast Episode 128: Best Party Board Games.

What are the best party board games you can bring to a friend's house? You've been invited, but now you need to make sure you don't disappoint. Nothing sinks a gathering like an over complicated and too nerdy board game. So how do you find the balance between intellectual and engaging, but without resorting to mindless and unfun. Nobody actually wants to play Twilight Imperium after a long week of work, and nor do they want Monopoly to remind them of the harsh realities of capitalism.On this edition of the podcast we discuss some of our favorites to bust out at board game night. Listen to the episode to hear the full conversation and refer to the list below for highlights.

Jeff stops by for a serious chat about games. Most of the time on Full Belly Laughs the conversation centers around food, but other times the hour is dominated by talking and playing games. Jeff is a podcaster who loves table top gaming, so it only made sense to get his opinion on the best party board games.After a thorough examination of the topic, Jeff and Brian enjoy a round of Guess Who. They use the modified rules that work best for the podcast. It's a reminder that some games just need a slight change to make them way more fun for a lighthearted group. Not everyone plays games to actually battle and be competitive. It's wise to make board game night suitable for everyone, and give people a chance to let their hair down.

Based on the conversation and experience, the following list of games are worth trying at your next board game night. Be sure to know your audience. Not every friend group likes the same types of things, so be sure to read the descriptions to ensure a particular game makes sense for your group.

This is the best marriage of skill and fun. It's an easy sell to a group of people that don't hardcore board game often, because it's easy to conceptualize what's going on in the game. Sometimes a board game is so nerdy even some nerds can't wrap their head around it. Sushi Go is simple: the cards represent a conveyor belt of sushi, and each turn you pick something to add to your plate. The better the platter the more points you score. It's just that simple.A similar game to Sushi Go is 7 Wonders, but this requires a bit nerdy of a group. Each player is picking cards every turn just like Sushi Go, but each card represents a building in your kingdom. Each player builds around one of the Seven Wonders of the Ancient World, and you score points by having a synergistic city. You can also borrow and trade with your neighbors. There are a bunch of other quirks which are cool if you like more depth and skill in your games, but most people didn't even make it this far in the paragraph; it had become too overwhelming just getting a brief description of that game. This is where Sushi Go shines. It's easy to understand, play, and most importantly isn't mindless. Once everyone plays it a couple times, there is real strategy and depth to the game.

There is a deadly virus spreading across the globe, and it's everyone's responsibility to contain it before humans go existent. That's the premise and it's easy for everyone to conceptualize. The best part about this game is that it's cooperative, so people that enjoy games for the hang might take to this. If you're group likes to be really competitive, then this will frustrate them.Warning: if you bring this game be sure not to play the game for everyone. So many times someone introducing a game to the group ends up telling everyone the most optimal thing to do each turn. This isn't fun for anyone, including yourself at the end of the day. Be cautious not to reveal the best moves. It's about the journey not the destination. Yes the world will probably succumb to the virus the first time you play with a casual board game group on Friday night, but they will learn from their mistakes and future games will be more rewarding.

It's like Apples to Apples but with pictures. The cool part about this game is it allows for more creativity. In Apples to Apples you either play with a group of people that love absurd clues or hate them. In Dixit you want to thread that needle. Given that it plays to both types of groups, it has a better chance of pleasing everyone. There is also a definitive end by scoring points, so the game doesn't drag on like some Apples to Apples groups that don't follow the rules.And yes Cards Against Humanity is similar to Dixit and Apples to Apples, but it's far inferior. The novelty will run out quick (even quicker if someone is offended early on). The reason the game does not have a long shelf life is that it feeds you the punchline. Certain cards will always win, or at least always win with your friend group. In Apples to Apples and Dixit there is more room for creativity.

Those are the top picks for party games at board game night. Let us know your favorites by using the Contact Form. Solid recommendations will be given a shout out on future episodes of the podcast.

Learn about the best party games to bring to your next board game night.

Jeff Stormer, host of Party of One Podcast, helps lay down a great list of party board games for any occassion. Enjoy the list now.